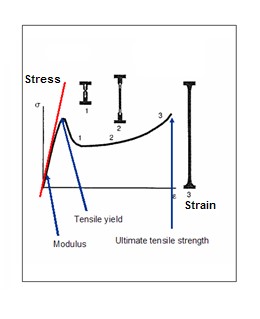 What is Tensile Testing?

The tensile behaviour of polyethylene is routinely measured on a mechanical tensile testing machine (e.g. Instron machine), by stretching a dumbbell of material at a fixed test speed). 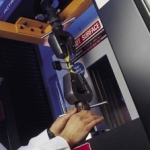 The initial response is linear, i.e. stress and strain increase in proportion.  This is known as the initial elastic response.  The gradient of this linear portion (indicated by the red line in the picture above) is known as the elastic modulus and is usually denoted by the symbol, E.

E can also be referred to as the Young’s modulus or tangent modulus.  For accurate measurement of the modulus during tensile testing it is necessary to use an extensometer, which is a device that accurately measures the strain in the parallel central region of the specimen.

Following the initial linearity, there is a gradual softening of the material as the crystal structure reorganizes by intra-crystalline shear.  This process takes place in the 0 – 5% strain region.  It is not unusual for values of modulus to be quoted for specific strain values, (e.g. the 1% secant modulus is defined as the stress at 1% strain divided by 0.01 or E1%)

The strain at which yielding occurs is typically 8 – 25% depending on the density and crystal structure of the polyethylene.  Further extension of the material leads to a reduction in the measured stress – the yield process can be regarded as an energy barrier.  In conjunction with this stress reduction, the cross-sectional area of the yielded region decreases and a “neck” is formed in the material where subsequent yielding is localised.

A region of extension at constant stress then follows as the “neck” propagates.  This is referred to as the “drawing” process.

Finally, after complete propagation of the “neck” into the shoulders of the tensile specimen, the material hardens due to tightening of the extended molecular network and the stress rises.  The rate of rise of the stress in this region depends on the detailed molecular structure and is related to the stress crack resistance of the material, (e.g. copolymers). 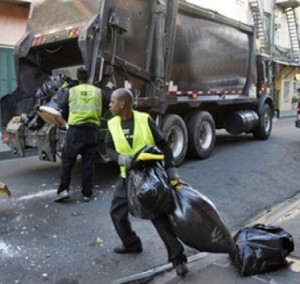