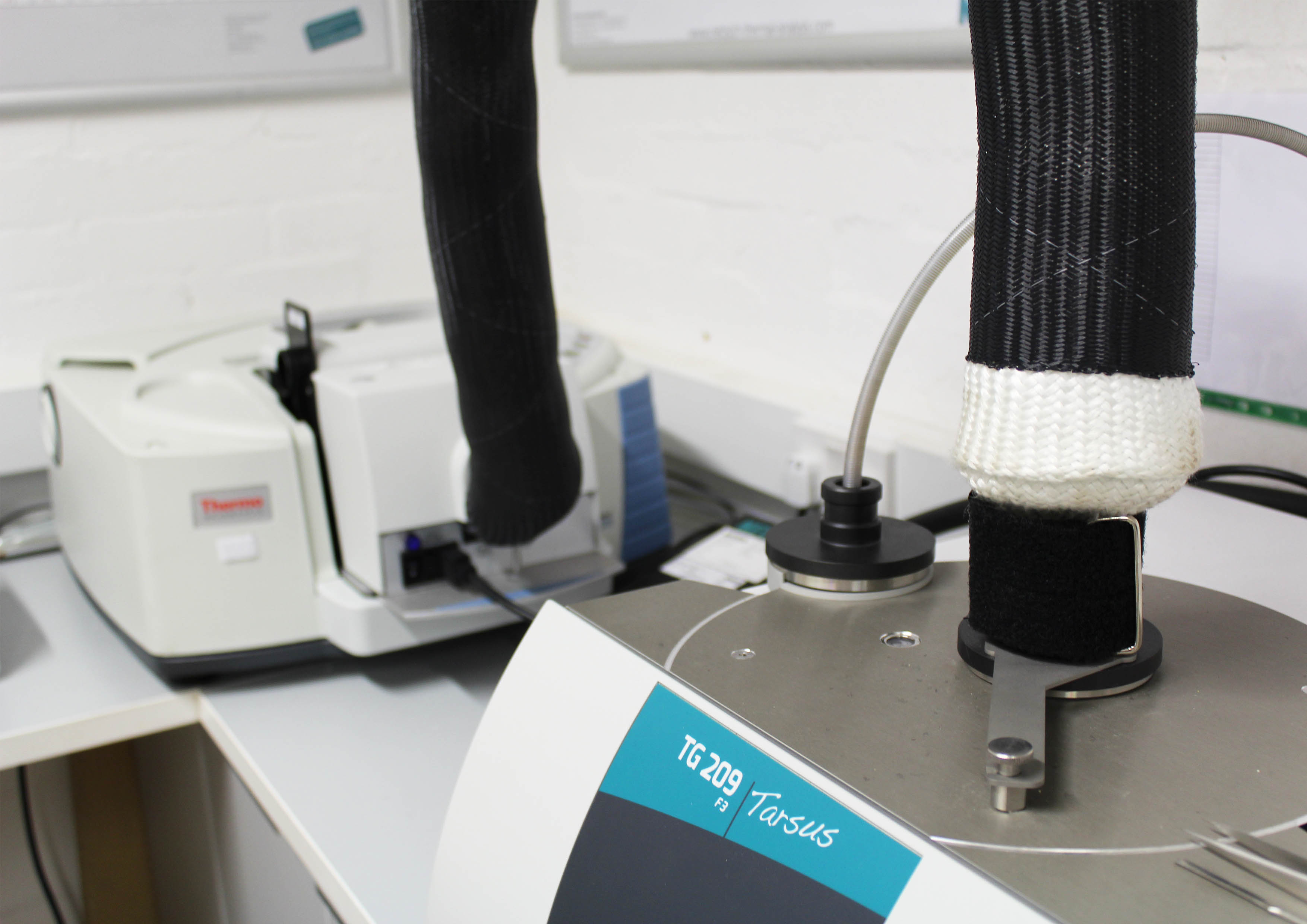 The increasing demand for quality and safe products with enhanced light weight, mechanical/thermal and fire-resistant properties has inevitably resulted in more challenging research, development and material characterisation processes. Complex materials, such as composites and plastics filled with UV and/or fire-retardant additives, stabilisers and plasticisers etc, have become very popular over the last few years finding applications in a wide range of industries from aerospace to Oil & Gas. These complex materials often require complicated characterisation and identification techniques, involving expensive equipment as well as harmful chemical treatments.  The combined FTIR (Fourier Transform Infrared Spectrometer) with a TGA (thermogravimetric analyser or TG-IR) is a recently developed polymer characterisation technique which has proven to be an excellent material analysis tool, especially in the polymer producing, chemical and pharmaceutical industry.

TG-IR (The polymer characterisation technique : TGA – FTIR) belongs to the family of evolved gas analysis (EGA) techniques, which analyse the gases or the volatiles as they evolve from a specimen that is subjected to a controlled heating process. Thermogravimetric analysis (TGA) is a quantitative thermal analysis technique which measures the weight loss of a sample as function of temperature under a controlled environment (usually nitrogen, oxygen or air). However, TGA alone is not possible to determine qualitatively what is being evolved at specific temperatures. Combining the TGA with an Infrared spectrometer enables the accurate characterisation of the evolved compounds. In other words, TGA can reveal how much (quantity) and FTIR can reveal what (quality) is being evolved from a specimen.

A TG-IR system consists of: a TGA, in which the sample is heated in a purge gas; the TG-IR transfer line, which is connected with the exhaust of the TGA at one side and ends in special gas cell fitted in the FTIR unit. The gas cell and the transfer line are heated at approximately at 200 °C to prevent condensation of the evolved gases. Both the TGA and the FTIR units are controlled by a computer. The moment the gases reach the FTIR cell, they are being scanned with infrared, producing unique FTIR spectra almost every minute. The total absorption of the evolved gases analysed by the FTIR is represented by the Gram-Schmidt curve (GS). The GS curve is similar to the DTG (1st derivative TG) of the TGA thermogram.

Herein, we present an example of the use of the TG-IR system in the additive identification. A large construction company required the use of specific fire-resistant polypropylene materials in building panels and wanted to check whether their material, provided by their supplier, met their requirements. For this reason, the specimens taken from the panel were studied under the TG-IR producing the GS  and the TGA thermogram. The specimens were heated from room temperature to 900 C under nitrogen. The FTIR gas cell was programmed to capture FTIR spectra every 30 seconds.

TG thermogram of the specimen revealed two main weight losses, one at 33 min (360 °C) and one at 44 min (468 °C) as shown in Figure 1 below. The residual mass at 900 °C was 8.6 %wt. The GS curve produced at the FTIR unit was in fully consistence with the weight losses shown at the TG. Strong IR absorbance was revealed at around 33 min and 43 min. In addition to these two steps, GS curve revealed an additional peak at around 4 minutes and a big step after the completion of the TG test at aprox. 90 min.

Analysis of the individual FTIR spectra of the compounds evolved at 4min, 33mm, 44min and 92 min, and comparison with the IR vapour phase libraries revealed that they correspond most likely to phosphorous trichloride, ammonia, propylene and tetramethoxysilane (Figure 2). The propylene compound evolved at 44 min or 468 C is related to the base polypropylene compound. The level of the PP is 74 %wt. The latter will indicate that the remaining 15% is the fire-retardant compounds.

According to the TG-IR test, (polymer characterisation technique : TGA – FTIR), the fire-retardant additives are consisted of ammonium polyphosphate and silicates. Phosphate components in the mix decompose (preferably before any of the gas generating components like organic polymers etc.) when exposed to high temperature forming a liquid phase. Ammonium phosphate decomposes at around ~ 350 °C releasing ammonia and phosphoric acid. Ammonia gets entrapped to cause foaming and promote intumescent action. Phosphoric acid reacts with organic polymer to form carbonaceous char which oxidatively depletes due to further heating and forms ceramic structure residue. At around 850 °C the composition forms ceramic comprising inorganic phosphate component + mineral silicate. Silicate component react with phosphate at high temperature to solidify and strengthen. This also explains why at the completion of the test there was an ash residue of approx. 9%wt.

Figure 1. Top: TG thermogram (weight loss curve and 1st derivative curve) of the FR polypropylene. The weight loss steps, as well as the residual mass are highlighted. Bottom: The GS curve of the corresponding specimen tested in the TGA.

We have demonstrated the powerful material analysis capabilities of the TG-IR system have been by determining the level, type and form of fire retardant additives in a polypropylene sample. Tests were carried out using Impact Solutions’ state-of-the-art TGA from NETZSCH coupled with a Thermo Nicolet FTIR using a Thermo TG-IR heated transfer line. This system was purchased recently as a part of the constant Impact’s expansion in material characterisation. The strong background and knowledge in materials combined with the latest technology equipment, make impact solutions a leader in R&D of materials, as well as quality assurance and control. Should you have any further questions about our polymer characterisation technique : TGA – FTIR (TG-IR) or any other tests do contact us at info@impact-solutions.co.uk. 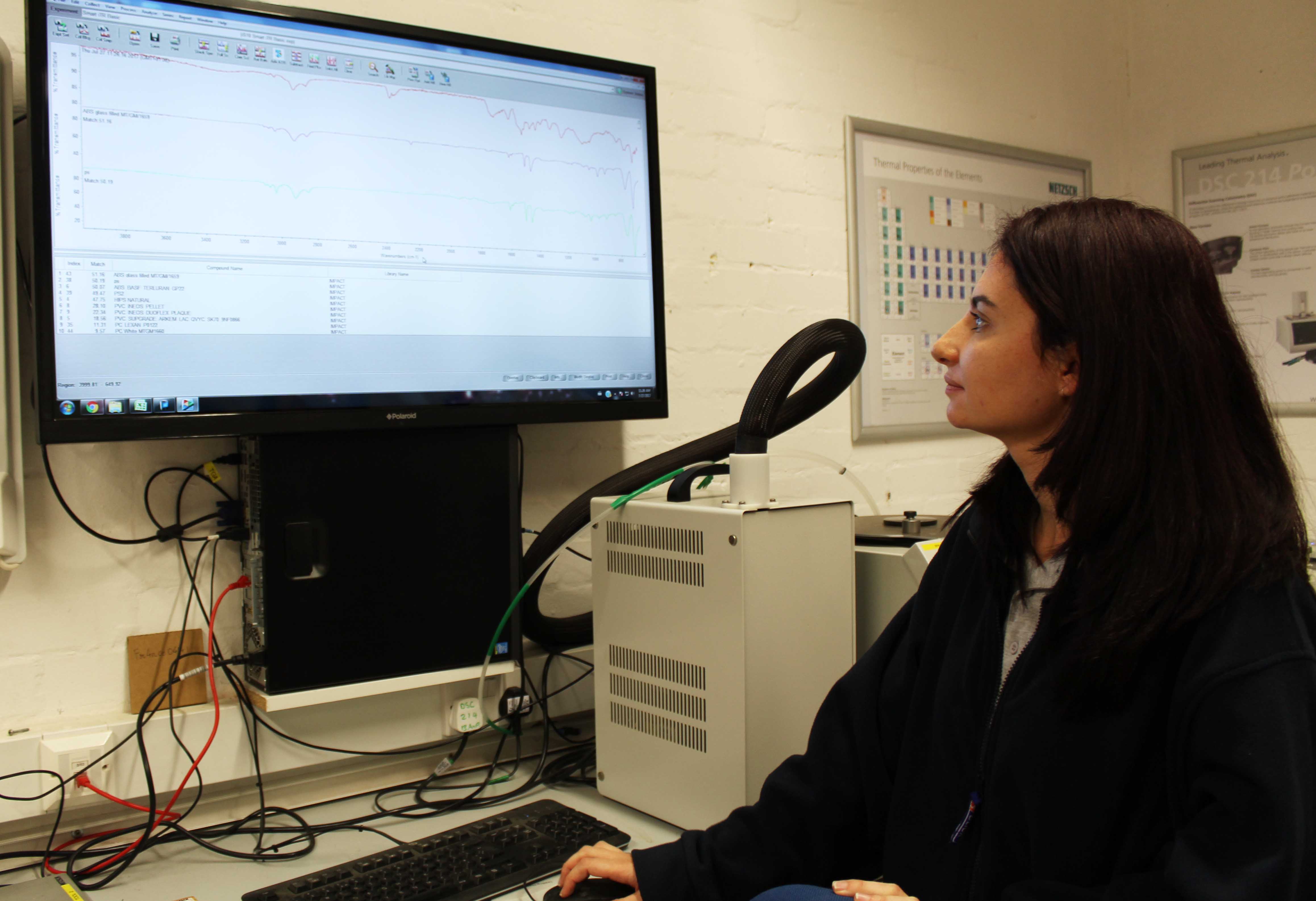