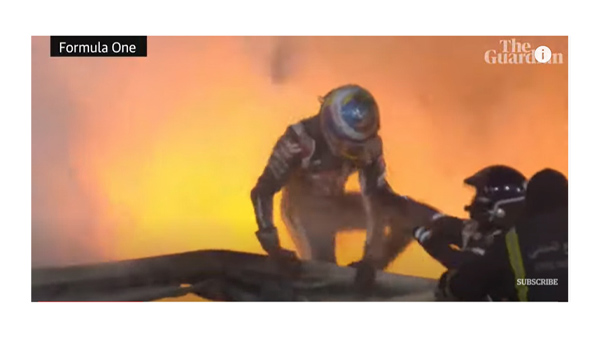 Season finale for the Formula 1. 2020 finds Red Bull Team to be the big winner and the Champaign explosions took over the celebrations. Both the winners and participants are relieved, as they can travel home for Christmas to be close to their families and make plans for the next season. But things could have taken a completely different turn from the previous grand prix in Bahrain, if it wasn’t for one thing: Material Science.

Lewis Hamilton, the winner of that Grand prix stated: “thankful to the FIA for the massive strides we’ve taken for Romain to walk away from that safely.”

Allow me to politely disagree with Skysports; as the innovation and progress in material science cannot be depicted as a “miracle”. Formula 1 fascinates the crowds, not only for the speed and team tactics, but also for the promotion of the latest technologies and innovation. A vehicle crashed the metal barriers (like the ordinary highway ones) at a speed of 137 mph with no casualties. How did this happen?

There were two main challenges. First: surviving the major impact and second: the fire and extreme heat and smoke. Everything started form the incredible development and evolution of the main chassis (monocoque) of the F1 vehicle. It is made of lightweight and extremely strong carbon fibre. In fact, 12 layers of carbon fibre sheet are stacked together to protect the drivers from impact. On top of that, a safety measure made mandatory by F1 in 2018 is the halo, a bar that extends from the cockpit around the driver’s seat. This bar, which is made from extremely strong and lightweight titanium, was claimed to be the most critical component that saved the driver during the impact.

Secondly, after the initial horrific impact, the vehicle burst into flames from the fuel that spilled to the superhot engine. Materials based on polymers have “kicked in” and allowed the driver to escape. Kevlar (aramid material) sandwiched with fire resistant polymer named “Nomex” protected the driver’s legs from the engine fire and gave him the valuable seconds to move his legs away. According to Dupont, Nomex is inherently flame resistant, offers supreme strength and heat performance, doesn’t melt, drip or support combustion in the air. A key factor in the protection provided by Nomex is its ability to carbonize and thicken when exposed to intense heat. This typical reaction increases the protective barrier between the heat source and the wearer’s skin and minimizes burn injury.

In addition, the polymer-based fabrics used in clothing and accessories, such as gloves and helmets have given the decisive survival aid to the driver that day. This was achieved mainly by making the fire test requirements as strict as possible. The new regulations “8856-2018” were introduced back in 2018. According to autosport.com, the previous flame test requirements are the same – where materials are subject to a 700°C flame for 10 seconds. After that time period, the flame is removed, and the material should then not burn for more than two seconds and there should be no debris, molten debris nor holes. In the updated tests, great attention was given to the Heat Transfer Index Test which reveals the temperature inside the material (i.e. closer to the skin). The device is based on a thermocouple placed in contact with the inner layer of the fabric, to measure the time required for an increase of 24°C from the start point, using a 1000°C burner to simulate a fire.

As a result, the horrific event in Bahrain has brought to the surface the importance in material science innovation, developments and the strict adherence to test regulations, quality control and quality assurance. Here at Impact Solutions, we are very proud that we excelled in both areas. As one of the biggest Polymer experts in the world, our Innovations and laboratory groups keep growing and move fast towards the same direction with sustainability, efficiency, and safety.

If you require our expertise, get in touch here.