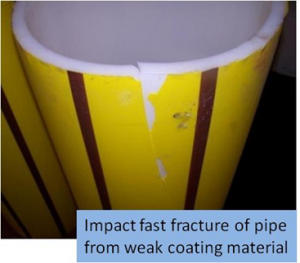 how to measure it, how it happens, and how to stop it.

Many plastic products experience bumps and knocks during their service life. For example, the plastic compartment of fridges, unloading pipes from the transporter, and car bumpers all undergo their fair share of accidental damage.

If the impact has enough energy however, instead of a scratch, the plastic can crack and the product completely fail (impact failure in plastics).  The speed at which the crack propagates through the product depends on a variety of factors but can be in the order of 200 – 500m/s, i.e. the speed of sound. Truly a Big Bang!

However, fast fracture does not only arise from an impact failure in plastics, but can also be caused by the build up of stress or pressure at a weak point, or site of initiation,  which if a critical level is reached can release the stored energy into driving a fast fracture.

A good impact resistant polymer is defined as one capable of absorbing a large amount of energy before failure.

There are basically three ways that an object can be impacted, (i) side on, (ii) in a snapping manner or (iii) head-on, and these are covered in the main standard test geometries – Izod, Charpy and Falling Dart Impact (puncture impact)

Whatever the method, these tests give the energy absorbed when a sample is impacted and it is usually the Izod or Charpy values that are given on a material data sheet.  These tests can be undertaken over a range of temperatures in particular to lower temperatures where the plastic becomes more brittle.

Using an instrumented impact system it is possible to look at how the force varies with sample deflection during the impact.  The area under this curve gives the energy to break the sample. The shape of the force-deflection curve for the Charpy and Puncture impact tests are similar and give a lot of information as to what is happening during an impact.

So what’s going on during an impact failure?

The shape of the force deflection curve tells us a lot more about the impact than just energy.  When a product is hit the impact energy is transferred to the plastic matrix.  If the energy is below the peak force in the force-deflection curve the plastic can absorb the energy by forming a craze structure consisting of a damaged region of micro-voids and perhaps fine cracks.  The size of the craze depends on the force delivered by the impact (positions 1,2 3 and 4 in the figure). If the impact delivers sufficient energy, formation of the craze zone does not absorb all the energy and the excess goes into propagating a fast crack which is difficult to stop resulting in complete product failure. It’s a bit like rolling a ball over a hill.  If the ball isn’t given enough energy it can’t get over the hill but given enough energy the ball gets over the hill and can then run away.

A fast fracture surface, particularly for glassy polymers, is usually smooth and featureless because the molecules are too locked into their structure and cannot respond to a rapidly advancing crack.  They are brittle!

However, when the molecules are able to respond during the impact the fracture surface can show some ductile features as shown opposite. This shows the Charpy fracture surface of a polyethylene pipe sample.  The craze is visible behind the notch and the white regions highlight ductile behaviour where the molecules have responded and material has been stretched.  These shear-lips are absorbing energy as the crack moves forward and can in some cases arrest the crack.  The energy absorbed by the shear lips corresponds to the energy under the Force-Deflection curve to the right of the peak force.

A good impact resistant plastic needs to be able to absorb a lot of energy in forming the craze region to stop rapid crack propagation.   This can be achieved in a variety of different ways. The list is not exhaustive but here are some of the common existing methods of improving performance.

An example in semi-crystalline polymers such as PE is to increase the molecular weight. This results in long molecules being able to cross more than one crystal plate and can therefore tie the whole structure together. Another modification could be the replacement of a homopolymer with a copolymer which introduces a less stiff more ductile molecular structure. Another way of modifying the crystalline structure could be the introduction of orientation into the polymer so that failure is inhibited across the direction of orientation.

Whatever the material, however, if the energy is great enough or the temperature low enough a fast fracture can occur. Understanding what causes that failure, however, takes us a long way to limiting the big bang and catastrophic failure.

For more information contact us on info@impact-solutions.co.uk, or phone us on +44 1324 489182.  Article originally published by the BPF.